Taking The Thanksgiving Turkeys For A Walk 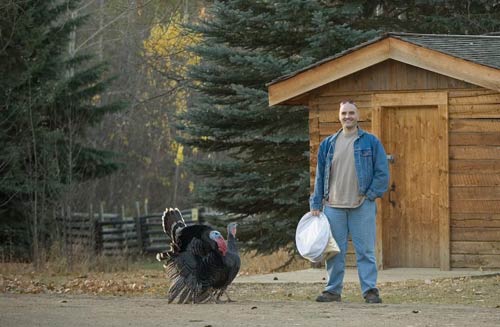 My girlfriend Darlene is a professional photographer. A good friend had asked for some shots of her, her new boyfriend and his family, so we headed off to Edmonton’s Fort Edmonton Park. We got to the location when we began to be stalked by these two Turkey’s. They just wouldn’t leave us alone, and having just read about how Turkey’s are quite dangerous and can “snap your head off”, I decided to keep our small group safe. 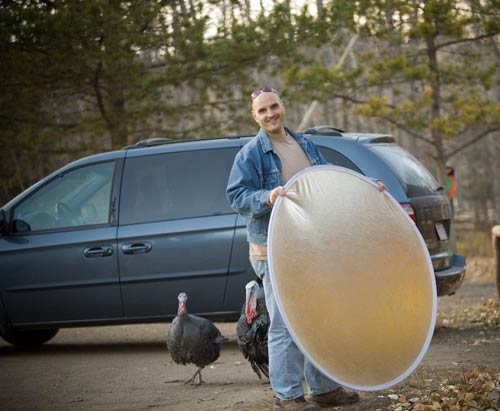 The first rule is to keep some large object between you and the Turkey. I had Darlene’s reflector (I am the “light guy”), so I opened it up and used it to shoo away the big birds. It barely worked. As I got them a few feet away and then headed back to the shoot, the Turkey’s just followed.

I then tried another approach. Talking to them. I walked away from the photo shoot and told the Turkey’s to come with me. They did. Now this was getting quite weird because as I walked away, they just kept following. They wouldn’t leave me alone. The shots you see here are from a good 150 feet away. I had to take the Turkey’s for a long walk, away from the group, around some buildings and then sat down hoping the birds would forget that I was there. Then I snuck away.

I used this approach a few times because each time I thought they were ok being alone, they would trot after me and the whole process would begin again.

Eventually it worked. I got them distracted behind a few buildings, snuck away and joined the shoot just in time as I was needed.

Everyone got a great laugh about 5 minutes later because when they finally found me again, they literally came running across the grounds at full trot.

note: I made up that part about Turkey’s being able to “snap your head off”. Don’t believe everything you read on the internet about Turkeys, Turkey safety or Dangers of Turkeys.

Places To See Before You Die Canada Version